Every year, usually sometime in December, I do a post *somewhere* about how my year has been and since it's December, it's time for a recap of my year. My 2018 kind of feels like it started around November 2017 in a way because that's when I started putting into motion a lot of the things that paid off this year. In November 2017, I decided that I wanted to move on from my comfortable but ultimately unfulfilling admin job. It was thanks to that job that I realised my true passion was for solving problems and that my original trajectory, before I went to university for design, was the best way to achieve that. That is, I wanted a job in IT. It was also in November 2017 that I decided to begin studying for my Cisco CCENT (ICND1) which is the first half of the arguably better known CCNA certification. This was my first time studying for a certification outside of an educational institute and I was a little concerned about how long it would be before I gave up on it. At that time, I had a lot of trouble with committing to projects and putting the time in to see them to completion. I’d also never really had to study properly in my life and kind of cruised by in TAFE and university. In January, I started taking drawing more seriously again as well. I started the Drawabox course and almost immediately, my work improved just by virtue of practising the basic mechanical skills of drawing. This was an exercise in getting over what I thought I knew. For real, it took me a long time to realise that I wasn’t above any of this… and depressingly, how little of it I’d been taught at uni. That said, I still don’t regret my degree. It was worth it for other things. I managed to get myself into a sort of routine where I’d study my CCENT from my Kindle and take notes at the lunch table at work and draw when I got home. This was kind of awesome because I was getting a bit of time in for both my passions every single day. In April, I sat my CCENT exam and passed convincingly with 948/1000 with a minimum passing mark of 832/1000. I vowed that after that, I’d take a month or two break to draw and then get right back to it. Well… that both happened and it didn’t. I did take a break of about a month and I did get back to it, but it didn’t last. I only got one part into the CCNA (ICND2) book before I got kind of bored. The real problem for me was that it was a lot harder to find resources to practice the things covered in the ICND2 and I couldn’t just virtualise situations to troubleshoot. Without the troubleshooting, I was just doing rote configuration. I’m good at rote, but I hate it.

So once I dropped the ICND2, I picked my coding stuff back up and started a new schedule to balance my art and coding. That is, on Mondays and Wednesdays, I draw and on Tuesdays and Thursdays I code. On Fridays I have a free choice and the weekends are either for relaxing or working on whatever I want. There’s one flaw with getting used to actually working on things in my spare time and not procrastinating so hard… it’s very hard to enjoy down time. I feel a twinge of guilt every time I sit down and game for a bit, particularly if I *am* supposed to be doing something (like on a weeknight). It’s hard to emphasise how much the consistent work has helped with my drawing and coding skills. Seriously, it’s ridiculous how much improvement you can find by drawing for 10-20 minutes during a lunch break or thinking over a coding problem while doing something else. A common thread throughout this year was also applying for jobs, getting a flurry of interviews then rejections and then nothing at all for months at a time.

In late August, I had quite a few, something like five interviews in one week. It was seriously nuts. I missed out on both a job and another interview because my phone was vibrating in my pocket in the middle of an interview. Missed out on the interview because they failed to ever get back to me despite leaving 3-4 messages. Anyway, one of those job interviews in August was for an application support job and I saw the ad shortly before applications closed and thought… that’s basically me. They were looking for things like customer service background with MySQL and JavaScript skills a distinct advantage. I got through to the second round of interviews and down to the top two candidates. That job went to the other guy. They told me they’d keep my details on file. This rejection kind of knocked me about a bit because I was having a bout of ill health and they’d made it a little bit personal by asking me if I had a preferred name. Not even 4 weeks later, I received a call from the person that had interviewed me telling me that they had another position open up because someone had left. They didn’t even bother advertising the position and after almost a year of looking, I finally landed an IT job. Its been roughly a month since I started that job and I’ve been enjoying it a lot and I’m incredibly relieved that it was in fact what I wanted after all. Anyway, everyone loves a little progress shot so here’s a comparison of my drawing at the start of the year and one from the end of November. 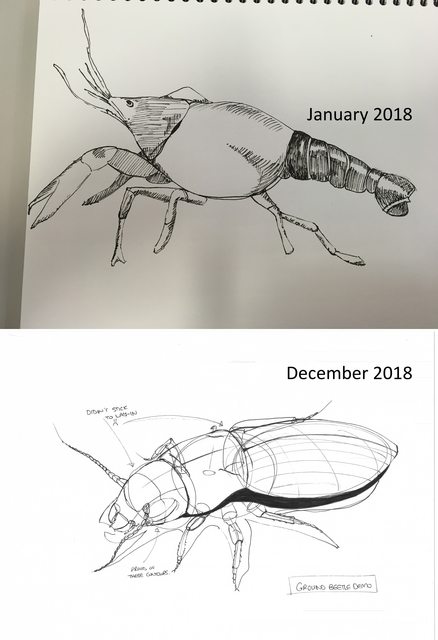 Since I now feel capable of actually living up to a New Years Resolution and because all it really takes is consistent work, I've included some below. I’d rather call them goals though, because that feels less cliché and less like I’ve got a time limit.