Once I finished [Lesson 1](https://blog.meta.pw/draw-a-box-lesson-1), I was instructed to tackle the 250 box challenge because my boxes were, frankly, woeful. You might be thinking "250?! Why would you draw that many boxes?" or if you're familiar with the Draw A Box curriculum, you might be feeling my pain. The intention of drawing 250 boxes was to improve the student's understanding of 3D space. This unique form of torture started when a student kept bothering the creator of Draw A Box with questions and, in an attempt to get the student to leave him alone, instructed them to draw 250 boxes. When the student returned after drawing 250 boxes, they said that it helped them with their understanding of 3D space and so, it was then a task routinely assigned to those following Draw A Box. So, it was with that knowledge that I started the 250 box challenge. The task is simple: Draw 250 boxes of all shapes and sizes in a mix of 1, 2, and 3 point perspective. I received a piece of advice in my lesson 1 feedback that I stuck very closely to throughout my box challenge.

…you very visibly got a little overwhelmed by the idea of taking these individual lines and making boxes from them. Our brains tend to look at what we're drawing as units. For the lines section, each unit consisted of a single line, so we allotted to it one unit of time. For the ellipses, each unit consisted of an ellipse - and they too received one unit of time. With the boxes, our unit consists of a box - again, one unit of time. But that's not correct. A box should consist of twelve lines, so we must be investing twelve units of time - and when we don't, we end up getting sloppy, skipping steps, and ending up with looser linework.

This is a big part of why my box challenge took me nearly two and a half months but I did get a lot out of it. *A lot.* My method for drawing boxes utilised Uncomfortable's "Y method". I found it helped to think about the lines I put down to complete those planes as converging towards the vanishing point and roughly making them parallel, so that they were at the same angle to each other. I lay down dots to estimate where my lines should go, ensuring that both the vertical and the horizontal lines are converging towards their respective vanishing points. To demonstrate my method of laying out dots, I made this demo for someone on the subreddit: 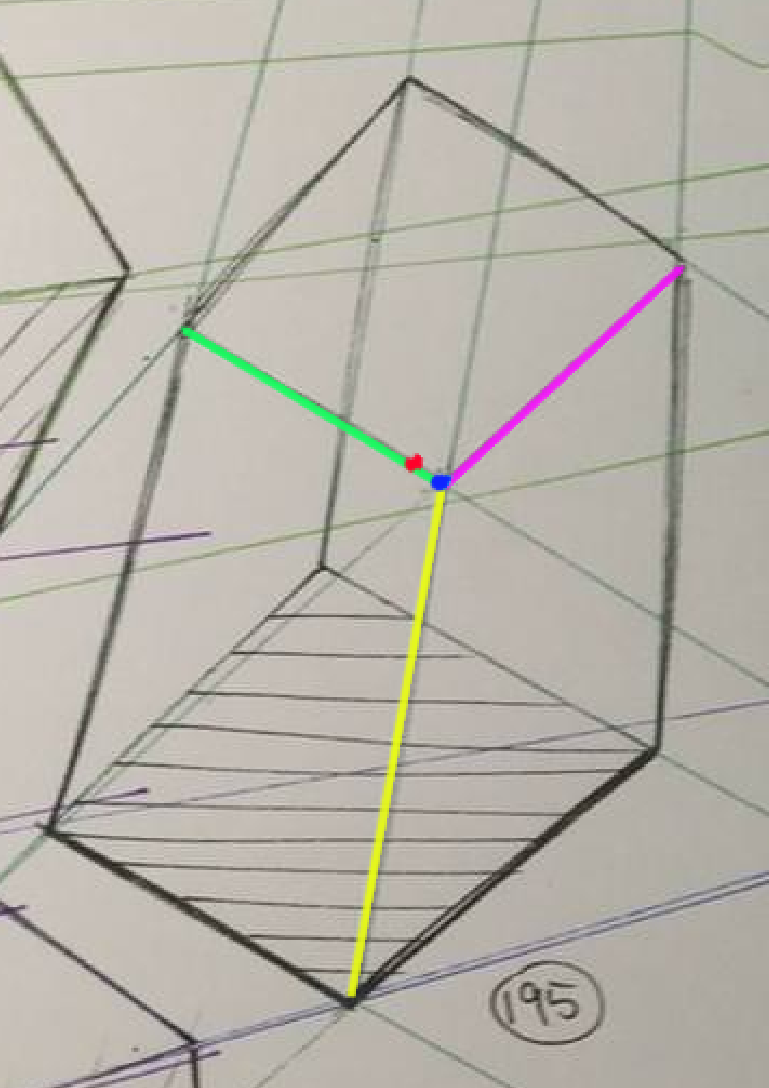 The shaded plane is to the right of the initial Y shape and the coloured lines denote the rear lines of the box. Now, when I am working out the convergence of these, I first ghost from the upper left (top) point of the green line, as this is the vertical and the vanishing point with the least extreme convergence. I estimate approximately how far down this point should go and I mark it; the red dot is an example of where I might temporarily place a dot. I then ghost from the right corner of the box, along the pink line, estimating how it should converge in relation to the line above it. I then try to place my point directly below the temporary mark (red) I made in the previous step. This then gives me two lines I can draw: the pink and the green. Now, because I've gotten the pink and the green roughly correct, the final line (yellow) should also be correct and I simply connect the rear corner of the box to the front corner along that convergence. This general method also works for the front planes of the boxes as well. I favoured this method because it meant I was only thinking about a maximum of two convergences at once, not all three coming to that single point in the back of the box. It made it far less overwhelming for me. Using that method most of the way through, below are the first and last boxes I drew in my challenge.

I got a little bored with boxes somewhere around box 100 and started to introduce the subdivision, which is a concept used much later in the lessons to draw perspectively correct objects and vehicles. I then extended this concept to add additional boxes to my original constructions, this can be seen in boxes 247 and 250 above. These injected a little bit of fun into the process and should, hopefully, mean that I have less trouble with them when I get to the later lessons.

It cannot be emphasised enough how important it is to take your time with this and get as much mileage from it as possible. If you're ghosting every line of your box, that's at least 3,000 lines you will have ghosted by the end (more if you hatch!). If you apply line weight to every box, it is somewhere around 1,500 lines super imposed. This is an incredible amount of mechanical practice and is far more valuable than grinding lesson 1. So, I realise I've talked about the box challenge a bit like I've survived some horrible disaster (the only disaster here was my boxes) but it's hard to express how much all that tedium has helped me in my drawing ability. On its own, being able to draw straight lines and boxes is a nice skill to have, but the real benefit gained from this ordeal was the ability to see my boxes as real 3D objects, despite being on a 2D piece of paper. If you can convince yourself it is 3D, you can convince your audience. Below is the full 250 box challenge album.